As five African countries, including Kenya, gear up for elections later this year, IDLO’s Director-General, Irene Khan, visited Nairobi to support ongoing work in the country and met with officials to discuss electoral justice, good governance and gender equality.

A highlight of the mission was the launch of IDLO’s report Avoiding Violence and Enhancing Legitimacy: Judicial Preparedness for Handling Electoral Disputes in Kenya and Beyond. The publication draws lessons from IDLO’s work in Kenya leading up to the 2013 elections, and found that the successful management of election petitions by the judiciary was a key factor behind the relatively peaceful elections and transfer of power in 2013.

“We meet here today, three months before the next Kenya general election. The conduct of periodic, free, fair and peaceful elections is hallmark of our democracy,” remarked Kenya’s Chief Justice, David Maraga at the launch event.

In many emerging democracies, concerns about judicial independence and weak and incoherent laws prevent the timely and fair handling of electoral complaints. Courts often do not have the capacity, knowledge or means to effectively manage electoral disputes. What’s more, electoral cases are inherently politically sensitive with high public interest in their outcomes.

The Chief Justice continued to say that while elections are often “highly emotive” events, the management of petitions and the role of the judiciary has a huge impact on public perception of the judiciary’s ability to resolve all disputes, not just electoral cases.

In her remarks, Ms. Khan noted, “IDLO’s report highlights practical lessons from Kenya and other countries of how electoral grievances can be resolved through judicial means, ultimately improving public confidence in democratic elections, reducing the risk of conflict and sustaining peace.”

IDLO’s report highlights practical lessons from Kenya and other countries of how electoral grievances can be resolved through judicial means, ultimately improving public confidence in democratic elections, reducing the risk of conflict and sustaining peace.

In addition to an independent judiciary and strong laws in place ahead of elections, IDLO’s report underlines the critical importance of engagement with non-legal actors, including a focus on public outreach to empower marginalized groups, political parties, candidates and lawyers to use the electoral dispute system.

“At the end of the day, the most critical challenges are not always related to the law and the judiciary itself but derive from the attitudes and behavior of political and other actors and institutions,” she continued.

Drawing on lessons from IDLO’s work with the judiciary in Kenya, the publication forges a clear link between dispute resolution and sustaining peace.

At the end of his remarks, Chief Justice Maraga affirmed that the judiciary is ready to handle any disputes that may arise around upcoming elections in August, and that all judges and magistrates are working to develop continued confidence in the judiciary and the integrity of the electoral process. He concluded, “They, too, live in this country and are committed to ensuring that our beloved country does not go back to the dark history of 2007.”

While in Nairobi, Ms. Khan met with the Attorney General to discuss IDLO’s contribution to various policy and legislative processes. IDLO has been working in Kenya, on initiatives as the country continues to implement the 2010 Constitution. IDLO programs have supported the review of legislation and policies covering human rights, land, devolution, security, gender equality, natural resources management and access to justice.

A large part of IDLO’s work in Kenya relates to gender justice and implementing the provisions for gender equality in the 2010 Constitution. In this context, Ms. Khan led a forum entitled, Assessing ongoing reforms for gender equality in Kenya within the context of constitutional transformation, to discuss women’s participation in the Kenyan government and increased access to justice.

The forum was attended by different stakeholders including academics, governmental and non-governmental actors, all working on the critical issue of advancing gender equality in Kenya. The panel raised several questions about the challenges Kenya continues to face in implementing provisions in the Constitution to counter gender discrimination, as well as the role of development partners and civil society.

Dr. Maria Nzomo, Director of the Institute of Diplomacy and International Studies at the University of Nairobi, noted that while Kenya has the legislation in place, implementation can be bolstered by collective action, including men’s participation.

Ms. Khan remarked that the development of Africa’s economy is “on the backs of women”, and reiterated the need to make laws work for them. During the forum, Ms. Khan also presented IDLO’s Strategy 2020 to participants, which recognizes the implementation of gender equality as a central theme in IDLO’s institutional mandate and programming.

The takeaways of the visit established the significant value of gender and electoral justice to the peace and development of Kenya. In this spirit, Ms. Khan invoked the UN Sustainable Development Goals, and in particular Goal 16, in describing the importance of the Kenya example: “What is happening here in Kenya, and what will happen, should be seen in a broader context of international acknowledgement and support for access to justice as a key means of ensuring sustainable development and sustaining peace.”

Kenya has been a Member Party of IDLO since 2009. 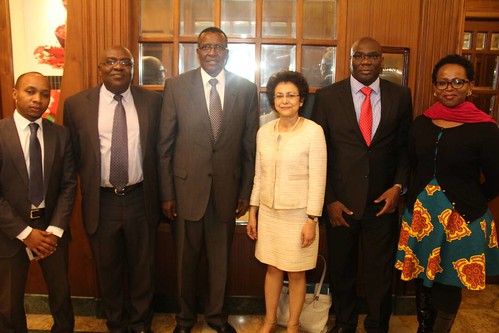