‘Rule of law runs through tapestry of SDGs’

‘Goal 16 focuses on the legal dimension of development but we could say the same of all the other goals, whether they focus on oceans, or health, or education, or environment,’ said the President of the 71st session of the United Nations General Assembly, Peter Thomson, during a visit to IDLO’s headquarters.

‘The rule of law and access to justice are like golden threads that run through the tapestry of the 2030 Sustainable Development Agenda,’ continued Mr. Thomson.

He visited Rome as part of a European trip aimed at strengthening momentum for meaningful implementation of the 17 Sustainable Development Goals (SDGs), especially through promoting education on the SDGs.

During the meeting at IDLO, Mr. Thomson was briefed by IDLO staff about how the organization's work is supporting the implementation of Goal 16 and other SDGs, in places such as Kenya, Afghanistan, Central Asia and Honduras.

IDLO's Director-General, Irene Khan, took the opportunity to introduce the organization's new Strategic Plan, which outlines the direction of work for the next three years. ‘Strategy 2020’ will pursue the 2030 Agenda in a number of ways, including through programs to advance Goal 16 and contribute to the achievement of other goals. 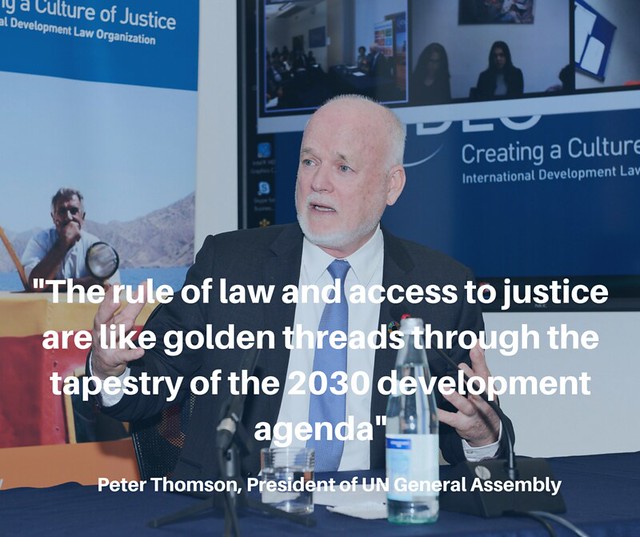